Starting at the company in 1984 as a salesman, Eddie is now our PASS Procurement consultant, sharing his experience in and knowledge of government procurement with clients and colleagues alike. 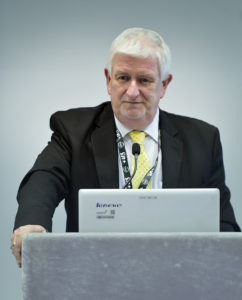 How would you sum up your job at BiP, Eddie?

I suppose a bit of a “Jack of all Trades” would be a good description. I deliver training, consultancy, webinars, occasional blogs, speak at conferences, judge the GO Awards, assist sales when they need my input, work with the Events Team, annoy IT Dev and generally try to keep out of trouble.

When did your BiP journey begin?

In 1984, back before many of our colleagues were even born. I saw an advert for a salesman, came for an interview and Ron and Leslie decided to offer me the job and the rest, as they say, is history. From sales, I moved into production and eventually into delivering training and consultancy.

Why did you stay?

I like the job, my colleagues, the variety of my role and the challenges it presents. Over the years, when you catch up with some of the people who’ve left, they often tell you how much they enjoyed BiP.

When are you at your most productive?

When given a challenging task and a deadline, just like most people I suppose. The thing about my role (and a shout out to Phil here as well) is we’re often up against deadlines and that’s probably when we enjoy it most.

We have all heard the tales of the legendary Portakabin® where BiP was born, but what was it really like?

Just that, a cold draughty Portakabin® on a Building Merchant’s site. One long room, with three small offices off it, with one of them containing the equipment we used to publish Contrax Weekly, the great grandfather of Tracker and everything else.

What are the biggest changes you’ve seen in the company and in procurement over the years?

In terms of the company, it’s grown beyond comprehension. From the Portakabin® all the way to our Glasgow and Manchester offices and from half a dozen people to currently around 140 people. It’s also been one hell of a journey.

In terms of procurement, no-one understood it in the early days. We would get letters and calls from public authorities threatening legal action against the company for publishing their notices, as they didn’t want suppliers from all over the country bidding for work. Thankfully, buyers and suppliers are a lot more attuned to the regulations these days and I think it’s fair to say that BiP played a major role in opening up the public procurement marketplace.

Are there any major changes in procurement on the horizon we should know about?

There are major reforms coming in England and Wales in the next 12-18 months and Scotland and N. Ireland will probably, at the very least, tweak some of their current regulations. However, procurement never stands still, which is one of the interesting things about my role.

What’s your favourite thing to do outside of work?

Spending time with my wife Roseann and walking Mac, our Westie.

In our next spotlight we will be chatting with Amy Bourne in our Media City office about her role in BiP.